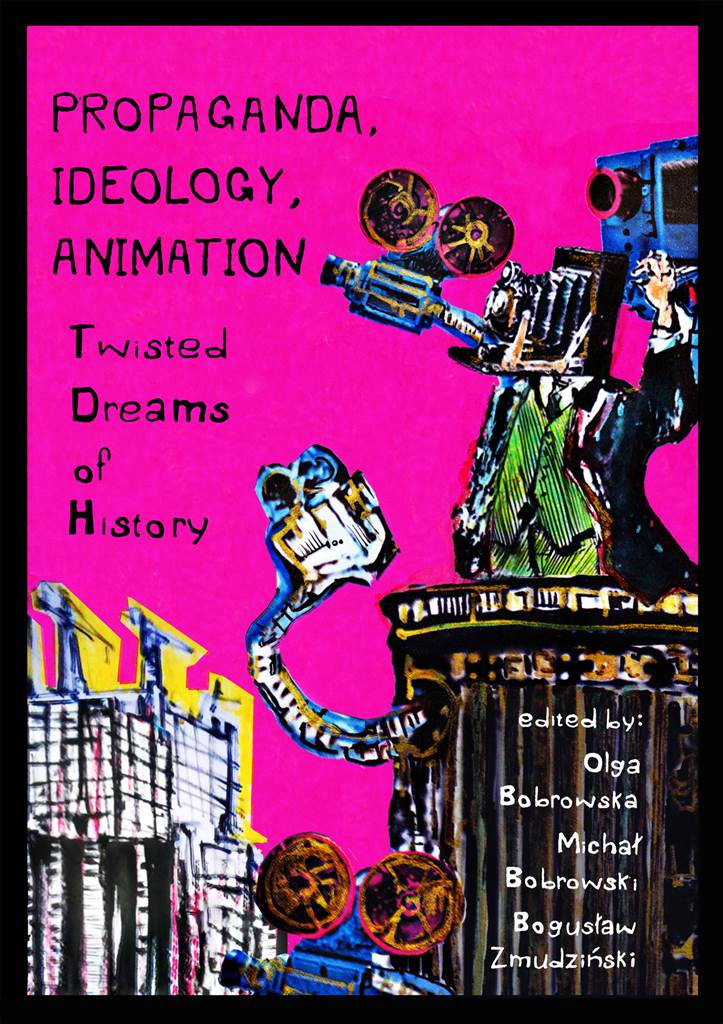 The publication is a part of the project “Twisted Dreams of History. V4 Perspective on Propaganda, Ideology and Animation”, supported by the International Visegrad Fund – Project #21720353

The publication in print is delivered for free to various European and worldwide cultural and educational institutions as well as delivered to the interested Readers upon request sent at stoptrikfestival@gmail.com (cost shipping on the behalf of the Reader). Additionally, it is possible to obtain a printed copy at the book presentations held on various animated film festivals and cultural events. Follow the route of the book presentations on www.etiudaandanima.pl, www.stoptrik.com and our social media!

The monograph regards the history and contemporaneity of animated film through a prism of the ideological entanglement of this medium. The editors have invited film scholars and critics to reflect upon the dangerous liaisons between animation art and official propaganda. Propaganda that uses the intrinsically symbolic and synthetic language of animated film, may be utilized as a perfect “laboratory”, allowing us to study the essence of manipulation, of rhetorical modes and of strategies of persuasion. The subject of art in service of ideology and propaganda requires a concentration on the egalitarian mainstream forms of animated film, such as children’s films and feature-length commercial production. Nonetheless, some of the texts refer to art-house animated shorts that combine personal commentaries on political issues with the reinterpretation and reconceptualization of propagandistic themes and styles. The authors study animated production against the background of historical and political contexts that include: Soviet and post-Soviet Russia, USA and Eastern European satellite countries during Cold War, Weimar Republic and Nazi Germany, People’s Republic of China under Mao Zedong, Marshal Tito’s Yugoslavia and its dramatic breakup, contemporary condition of  European integration. The contributors represent cultural diversity and differentiated research approaches as they come from various academic and cultural environments (Poland, Czech Republic, Hungary, Serbia, China, Greece/Estonia, Russia/USA, Bulgaria/Canada, Bosnia and Herzegovina/Sweden). Next to the papers written by the scholars of highly acknowledged status in worldwide Animation Studies (e.g. Mikhail Gurevich, Midhat Ajanović Ajan), we publish articles of the young generation of academics and film culture activists (e.g. Anna Ida Orosz, Jiří Neděla), as well as a manifesto of the 2017 Oscar-nominated animated film artist Theodore Ushev.

The volume “Propaganda, Ideology, Animation” is a second part in the series “Twisted Dreams”. The first one, “Obsession, Perversion, Rebellion. Twisted Dreams of Central European Animation” (2016), was focused on the dissident and counter-cultural features of animated film that undermine social and political taboos. We drew upon Theodor Adorno’s famous claim that mass culture may be described as ‘psychoanalysis in reverse’ for its ultimate goal is to anesthetize the anguish of critical reflection and to immerse the masses in the void of collective vacuity. In the current volume we attempt to switch the perspective. The contributors were asked to proceed with critical investigations into the political factors determining production processes as well as the form and content of animation. Moreover, they were encouraged to study ideologies and political doctrines of the previous and current century’s global regimes reflected in the mirror of animated productions. If mass culture is psychoanalysis in reverse, then propaganda can be called ‘behaviourism at full speed’, for it undertakes the task of controlling the behaviours of societies and nations. Regardless of their ideological backbones, the propaganda messages produced by 20th  and 21st century political systems are based upon rather similar theoretical and methodological assumptions.

From its very beginnings, animation has been used as a convenient channel to transmit ideology. Complex artistic works, educational children’s films, simple commercials – all of them have been incorporated into propaganda apparatuses upholding various political systems. The engineers of social order developed its effectiveness and transformed it into a powerful weapon of agitation and manipulation. After a period of stagnation in the 1990s and 2000s, in the following decade, animated propaganda seems to have entered a Renaissance phase. The echoes of 20th century propaganda reverberate in phantasmagoric discourses of populist prophets who unite their followers around great dualisms spread from inclusive values of pride and devotion to exclusive feelings of fear and hatred. Contemporary readers may benefit greatly from discovering and deconstructing the propaganda messages, especially since the logic of the Cold War, based on absolute ideological polarization, has made its reappearance in the ideological war between European nationalisms and Islamic fundamentalisms, and in the escalating trade wars between the USA and China.

Excerpts from the academic reviews

The texts collected in the revived volume are undoubtedly a valuable contribution to animation studies that enriches both Polish and world subject literature with many new thoughts and findings. Among the authors there are such outstanding and acknowledged experts in the field of animation studies as Mikhail Gurevich or Midhat Ajanović Ajan. The volume’s biggest advantage is that it may serve both film scholars and regular animation aficionados who may learn about such distinguished artists as Lotte Reiniger or Jan Švankmajer. It should also be noted that the volume’s erudite introduction in many cases supplements the content of particular texts with a deeper reflection.

The book analyses the historical and political contexts of animated film as well as its entanglement in propagandist manipulation and ideological dependence. (…) However, I am convinced that the entire publication has another, “subcutaneous” dimension. From a certain perspective this publication may be read as a demand for artistic freedom. Freedom that allows to express views, to argue against them and to create awareness of problems. The book makes one feel that despite propaganda and the ideological corsets, the freedom of art is possible.

Michał Bobrowski (Marie Curie-Skłodowska University in Lublin), Ideological Hall of Mirrors. Reflections of Soviet Propaganda in American Propaganda of the 1940s and 1950s

Magdalena Krzosek-Hołody (University of Warsaw), City. Mass. Machine. Urban Dystopia and the Nostalgia for Nature in Polish Animated Film of the Post-War Era

Bogusław Zmudziński (AGH University of Science and Technology in Krakow), Jan Švankmajer against Ideology and Propaganda

Midhat Ajanović Ajan  (University West in Trollhättan), Little Man at the Turn of the Worlds: A View of the Origin, History and the Ideological Foundation of the Phenomenon of the Zagreb School of Animated Film

Vassilis Kroustallis (Ionian University in Corfu), In and out of Europe: Translocality and Cultural Hybridity In “Crulic: The Path to Beyond” (2011)

Born in 1987. She is a PhD candidate in Film Studies at Jagiellonian University, Kraków, specialized in classic Chinese animated film and an author of academic articles on the subjects of Polish and Chinese animation. She is a festival director and co-founder of StopTrik International Film Festival (Maribor, Slovenia; Lodz, Poland), a festival dedicated to stop motion animation. She frequently collaborates with other festivals, among them Animateka (Ljubljana), Etiuda&Anima (Krakow), Krakow Film Festival. Film programmes she curated were presented at various festivals and events in e.g. Poland, Slovenia, Croatia, The Netherlands, Finland and China. Her reviews and critiques were published in film magazines such as “Kino”, “Ekrany”, “Zippy Frames” and “ASIFA Magazine”. In 2016 she co-edited the monograph “Obsession Perversion Rebellion. Twisted Dreams of Central European Animation”.

Lecturer at the Faculty of Humanities at the Marie Curie-Skłodowska University in Lublin. In 2010 he obtained PhD in Film Studies at the Jagiellonian University in Krakow, Poland. In 2012 he published a book “Akira Kurosawa: The Artist of the Borderlands”. In 2016 he co-edited a monograph “Obsession. Perversion. Rebellion. Twisted Dreams of Central European Animation”. He is a Programme Director and a co-founder of StopTrik International Film Festival (Slovenia/Poland), an event dedicated to stop motion animation. He works with various European festivals and cinema institutions as a curator, educator and cultural activist. He wrote numerous academic and popular articles devoted to classic Japanese and American cinema as well as animation.

Bogusław Zmudziński, lecturer at the Faculty of Humanities at the AGH – University of Science and Technology (AGH – Akademia Górniczo-Hutnicza) in Kraków. Author and editor of numerous publications on original film, including a series of monographs on outstanding European filmmakers, among others: Wim Wenders, Werner Herzog, Roman Polański, Ingmar Bergman, Siergiej Paradżanow, Andriej Tarkowski, Michelangelo Antonioni. For many years he has been conducting research on original animated film, in particular on the artistic output of the Czech surrealist, Jan Švankmajer. Founder and – since its creation – Artistic Director of the International Film Festival Etiuda&Anima, dedicated to the works of students of film and art schools from around the world and to original and artistic animation. One of the initiators and co-organizers of International Animated Film Workshop, held in Kraków since 1996. Originator and organizer of the 2010 global poll to choose the top 50 artistic animations created in the halfcentury of the existence of Association Internationale du Film d’Animation (ASIFA). Member of ASIFA and the Polish Filmmakers Association.

About the publishing house

The AGH University of Science and Technology Press was established in the early 50s of the XX century. The scope of activities of the Publishers includes publishing of scripts and academic textbooks, scientific periodicals and aperiodic dissertations and monographs. Currently about 60 books and 13 scientific journals with a total circulation of about 20,000 copies are being published every year. AGH journals appear in two formats: traditional (paper) and electronic. The latter is created through OJS system (Open Journal Systems) implemented in 2013 – software allowing to manage the publishing process via a website and enabling common (open) access to previously published articles. A tool improving identification of scientific publications available in the digital environment is also the DOI number (Digital Object Identifier) – since 2012 all AGH journals, as well as various single articles published in those journals, are accompanied by an individual number registered in the CrossRef database. The published items are recognized on the specialist book market for their high substantive and editorial level. Their recipients are mainly scientists, specialists in various fields of industry and students of majors and specializations conducted by the AGH University. AGH Publishers systematically participate in Wroclaw Scientific Book Fair, Scientific Book Fair in Krakow, Academic and Scientific Book Fair ACADEMIA in Warsaw, Poznan not only Scientific Book Days, as well as exhibitions (London Exhibition of Polish Scientific Books in 2010, Paris Exhibition of Polish Scientific Books in 2011, Munich Exhibition of Polish Scientific Books in 2012). Many of our publications had been awarded or distinguished during competitions accompanying those fairs.